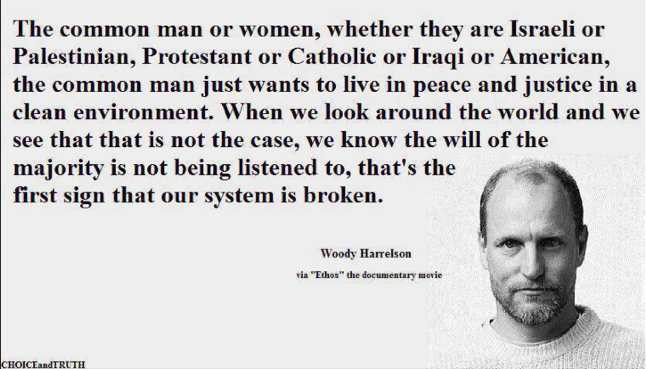 Ethos is a documentary disclosing the truth about our government control and corruption hosted by Woody Harrelson and written/directed by Pete McGain. Harrelson asks that you not believe his words but seek your own truth. Do your research, while the internet is still free check out what is really going on with our government and how it affects our world at large.
Do you really know who you are voting for? Do you have time to research what each candidate stands for and the promises they actually follow through with once they are elected?
Do you realize the government creates opposition so that you will be too busy to notice what they are really conspiring to do? It’s right before your eyes. It takes some research and an open mind but the facts are available.
The illusion that democrats and republicans are different is by design. If you break the opponents down to basic arguments you will see how they really sleep in the same bed.
Economic Services- Both Democrats and Republicans share same beliefs:
Private health care
Pro-NAFTA
High defense spending
Pro-big business
The small differences are based on Civil liberties which create opposition:
Democrats: Gay rights, pro-choice
Republicans: No gay rights, pro-life
That is pretty much it!
The similarities are almost like twins! The point is to get elected. They both follow same model. Make promises. Stay neutral/in the middle.
Both sides increasingly answer to the same master and it’s certainly not ‘by the people, for the people’.

“We don’t have an election anymore, we have an auction” ~ Bill Hogan

If you took a class in political theory you would learn the US in not a democracy. It is a Polyarchy!
Throughout the history of the world. The rich and powerful have always dominate. We were lead to believe that the basis of democracy was ‘We are all born equal!’
You should know, but don’t take my word for it! No one in power really wants democracy because it challenges the power structure.
Government was once the powerhouse but today corporations have overpowered western civilization, and are hell bent on ruling the world! It is happening now and has been in planning for decades if not longer.
Somehow corporations have subverted the law into recognizing corporation as a person! yes corporations are considered a person entity under the law.
Like us corporations have the right to property, life and the pursuit of happiness.
“No one in power really wants democracy because it challenges power structure.” ~Rt. Hon Tony Benn MP
So now that our our so called democracy is in the hands of the corporations since world war II we have seen considerable decline in every living system! The government is now powerless over corporations! Corporations by law must increase their bottom line. In order to expand they must sell more products therefore they must use more resources. The effect it is having on our environment is increasingly obvious yet we still drill for oil in the Arctic! That’s not morally blind that is morally bankrupt.

“The one aim of these financiers is world control by the creation of inextinguishable debt.” ~ Henry Ford

Our only hope is with eduction of the people to wake up and learn what is really going on. We have the power to say no simply through what we choose to purchase. As we learn what corporations are sucking the life out of us and our environment we can choose not to buy what they offer. We can choose to live life more simply with less things. We can choose to oppose big government and big corporation with our voice. It’s time to wake up and live a life with Love, freedom and abundance without killing our very planet that has so generously given to us.
Check out the full Ethos Documentary below.